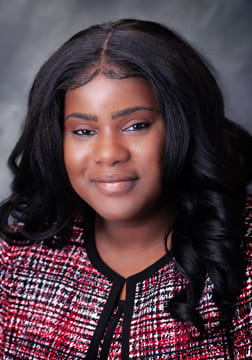 Bathche Fils-Aimé (BAW-chee FEE-se-may) is an associate with Keller Landsberg PA focusing primarily on property damage claims. Prior to joining Keller Landsberg PA, Ms. Fils-Aimé was a prosecutor in the Miami-Dade State Attorney’s Office where she litigated legal issues and prosecuted misdemeanor, juvenile, and felony cases. In addition to interning with the State Attorney’s Office in Gainesville and Miami-Dade, and serving as a judicial extern for the Honorable Ari Porth, Ms. Fils-Aimé served as an intern with the Office of Congresswoman Frederica S. Wilson.

Ms. Fils-Aimé received her Juris Doctor degree from the University of Florida Levin College of Law in Gainesville in 2017 as a recipient of both the UF College of Law Scholarship and UF Law Grant. She received her undergraduate degree in Legal Studies from Nova Southeastern University in 2015 and was the recipient of the Congressional Black Caucus Spouses Education Scholarship. She was on the Dean’s List during her four semesters.